For the first time since the pandemic began back in 2020, we, VAW Global, have a medical team from Mississippi State University (MSU) in Guatemala where they worked along with Ami San Lucas, our local health partner since 2006. 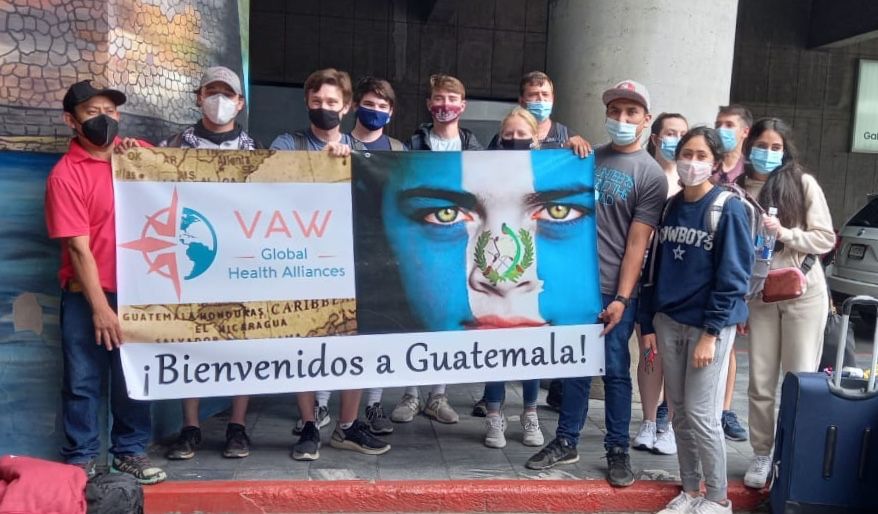 Upon arrival, interns are required to attend several orientations and workshops focused on professional development and cultural sensitivity, which will reinforce the training they received before their trip. After all of the on-campus and on-site trainings, the team had 6 intense days of work in clinics alongside Guatemalan Health Care Professionals. Thanks to that, interns from Mississippi State University have learned about healthcare in a global context, disease diagnosis, treatment courses, and clinic operations in an LMIC. Together, we provided care for 136 patients: 76 females, 43 children and 17 males!

However, VAW Global internship isn’t over yet for them. They still had an Education Day, Cultural Exchange/Immersion Days, and some more reflection to do before going back home. It is awesome, how everyone gets to meet amazing people, share stories , dreams and daily habits! Everyone involved is touched by the experience, and the friendships and memories made, last a lifetime!

A few months back we caught up with one of our veteran Team Leaders and Chapter Presidents Arush Lal. Arush is a Business Major on the Pre-Med track and has led multiple teams on trips to Panama and Peru. Aside from being an outstanding leader, Arush hopes to blend his knowledge of medicine with business in order to make a real impact in global health.

Below is a Q&A we did with Arush that goes over what he hopes to make of his future as well as how his time with Volunteers Around the World helped shape his perspective. Arush at clinic during on his first Medical Outreach trip with Volunteers Around the World to Bocas del Toro, Panama in May 2014

Q: How long have you been working with VAW?

A: Since August of 2013 after my freshman year. Briana reached out to me sort of out of nowhere and asked me if I wanted to lead medical trips, and I said, “yea of course why wouldn’t I want to do that?”

Q: So what is your life like outside of VAW?

A:  I am a Business Administration Major and Pre-Med student at Georgia Tech. I originally started off as a Biology Major, but as I discovered I was more and more passionate about Public Health and Global Health I decided to switch over to business to get some of the other skills for that field of work. Right now I’m focusing on supply chain management and operations, and long term I’d like to use these skills to work on strengthening healthcare systems. Specifically, I want to explore how we can use mobile technology to strengthen healthcare, like using an iPad to train healthcare workers or data systems to track progress of patients in developing country. Arush and his co-Team Leader, Samuel Mendoza, exploring the surrounding community after a long clinic day in Cusco, Peru in May 2015

Q: Given your unique academic background in comparison to some of our other volunteers and Team Leaders, what do you think draws people from different areas of study to a VAW trip?

A: I think a lot of it has to do with the unique nature of public health. Public health is focused on helping people which a lot of different people find amazing. Also there are a lot of different facets that go into public health systems, and whether students come from an economic standpoint, an international affairs standpoint or scientific standpoint, all of these different aspects to public health are equally important. I’ve actually been trying to create a global health major at [Georgia] Tech, and I was asking my boss who works at a global health agency what does it take to be a global or public health professional. He said you need international competency to know how to interact with people and systems from around the world, clinical literacy so you have technical knowledge of what areas of healthcare you’re impacting, a basic understanding of budgets and accounting when dealing with grants and proposals, and finally a basic understanding of policies related to healthcare systems when you go to other countries. So just there that’s policy, international affairs, business and science. All of those things come together in public health and it’s really important to bring teams of people together who look at public health with different lenses to make public health systems really work, and that’s something I’ve been trying to integrate with all my teams. Last year we had students from thirteen different majors all contributing in unique ways, and it made for a well rounded team that was able to do some really meaningful work. Arush and his team from Georgia Tech, Georgia State and the Univeristy of Georgia after a clinic day on Isla Tigre in Bocas del Toro, Panama in May 2014

Q: Do you have any examples of how some of these people from other majors helped contribute to your team’s success?

A: Last year there was one day in clinic where we noticed that even though the clinic was going smoothly, we still had a lot of people bottlenecked and waiting in certain areas. One of our volunteers who was an industrial engineering major stepped up and asked if he could leave his work station and focus on solving the bottleneck issues. Next thing I knew he had his notebook out and was creating these different flowcharts trying to track where in the clinic we can be more efficient to eliminate the bottlenecks for our next clinic. It was something I never would have thought of yet his experience in engineering served as a huge asset to our team’s success. I think VAW provides a great opportunity to bring people from different areas of study together to work on public health issues, and I’ve really enjoyed that while working with VAW. Arush and his team from Georgia Tech and Georgia State after their Anatomy class at the UNSAAC University in Cusco, Peru in May 2015

After the interview, we thanked Arush for the time he took to share his ideas and experiences, and we left with a rewarding feeling knowing how lucky we are to have people like Arush contributing so much to the work we do!

Together we can fund access to equitable healthcare around the world.
▶️General Info Session:
https://www.vawglobal.org/infosession/

Sometimes we forget to spend a few moments to be t

We are an organization comprised of people from al

Our primary objective is to reduce inequities arou

Are you Pre Dental? Are you looking for an Interns